I have just completed thirty days and 3350km on the famous Yukon River. It was yet another humbling experience for me. Some of you may have followed our pictorial journey and write-ups. The mighty Yukon welcomed us with open arms, revealing its stories, history, people and animals. And like all the rivers, it showed us enough, just to wonder what else is hidden, and left us wanting to know more.

It was the Yukon River that supported the famous Klondike Gold rush, in the early part of the century. And once the Gold rush was over, Yukon was forgotten. A story of rivers, which I have seen across the world, was scripted once again on the Yukon. Rivers and its people are forgotten, across the world, and why should it be any different on Yukon!!

Yukon Expedition team consisted of people from different nationalities. And we came here with different perception and expectations. And among the common expectations was animals- from mighty and fearsome bears, to small and equally fearsome mosquitos. Also, we expected to encounter, bears, which were high on our list. 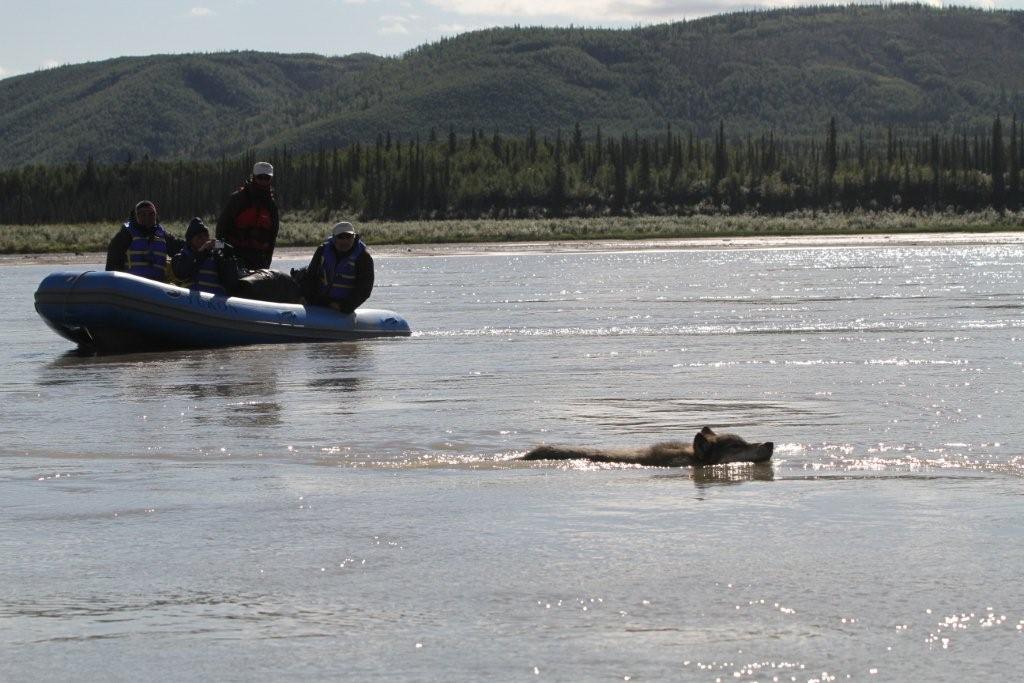 We were warned to take special precautions, and even advised to carry a Shotgun. We defiantly did not carry shotguns, but we were well prepared with bear sprays and flare guns. But the only bear, which came real close to us, was in our crewmember’s dream. On the very first day of camping, I heard a loud scream, announcing that a bear was in camp, as I looked out, I saw Paul standing outside his tent. He calmly said, Oh look at the Northern light, it is so beautiful.” I went right back in my sleeping bag. I knew there was nothing to worry about. Later in the trip, we did encounter animals, Brown bear, black bears, Moose, Wolfs, Porcupine, Beaver, Bold eagles to name a few. But all in all we did not see as many animals as we expected.

On the mosquito front, we were really lucky. As the winter had already started to set in, there were hardly any. Since we were travelling in the last weather window, we had to face some really harsh conditions. There were enough days when tents and boats had frost on them in morning.

The day we had olive oil frozen, without thermometer, we knew we were hitting sub-zero temperatures. Days after days we drove, with strong wind and cold rain constantly hitting us hard. Couples of stopovers for ‘Fire warming breaks’ were norm. But we also had some really beautiful and warm days, especially in the early parts of expedition. We all gathered in Whitehorse, Canada. Where our boats and engines were waiting for us at Titanium storage. After setting boats and shopping done, we went upriver to Lake Marsh, which is considered the source of the Yukon River. Here we collected the ritualistic water, which was then poured into the Bearing Sea, at the end of the expedition.

From Lake Marsh, we came down, crossing two dams, we went into continues our journey down stream. Yukon like all the rivers had different characters in different sections. In the upper parts water was so clear that we could see two to three meters down at the bottom very clearly. Later sediments stated gathering, and towards end it really got thick with them. Early on, the river twisted and turned like through the mountains, mostly in single file, with strong currents, up to 8 to 10 km per hour. Later, it spread out and sometimes we wondered if we were in a river or a lake. Lastly the river was controlled by the tides of the sea. Going up and down with it. People living by the rivers are our major interest. And in spite of the fact, Yukon is a “First world” river; people here too live as they have lived for thousands of years. 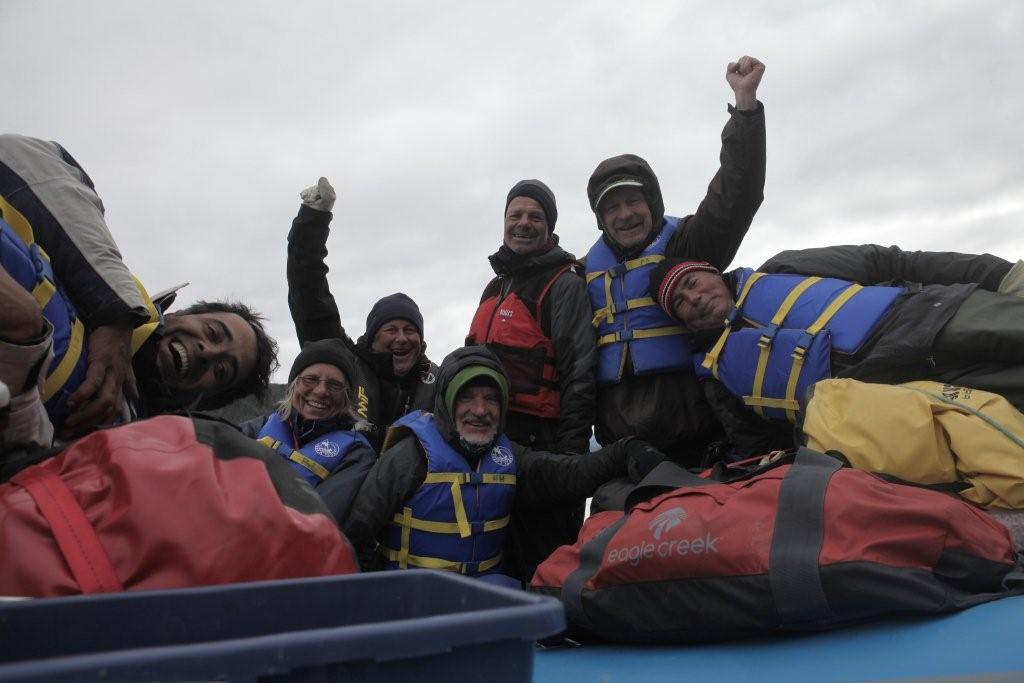 Dogs for transport and cloths and tents made out of skin may have changed, but not much else. People largely live on subsistence. Still a “hunting gathering” for food. Especially in Alaska, roads were not existent. And people had to depend largely on boats for transport. People we meet on rivers were a bit cold and distant on our arrival. But as soon as we interacted with them, they were warm and helpful. It is these loving memories we shall cherish always.

My team consisted of people from different walks of life. And all brought different expertise to the expedition. Peter, who was seventy-six was our senior most member of the team.

His years of organizational skills were great help for me. He was in so many ways my ‘Right hand man’. Also he was our chef. He not only provided us delicious food everyday, but also took care of nutrition, which we needed for the long, hard and cold trip. Paul was his able assistant on the cooking front. It always amused me how lovingly they discussed food everyday.

John and Leo were our skippers of the second boat. Leo, who has been with me on several expeditions, is always a pleasure to have around. With him and John I had the confidence that I can almost take care of any engine or boat problems. Hubert and Heike were our excellent camp in charge.

In the bear country, it is very important to pack up food properly at nights. And with them around, I never had to worry. Hubert our ‘silent worker’ also became our fire expert. Moment we reached at inland or beach, he was first to run to look for dry woods. Trust me in the rains; it is really hard to get dry wood. But he always had the fire going, to warm our cold bones. Little Peter as we lovely called him was my man. Always ready with a helping hand and with great outdoor skills. Apal my friend and Partner like always was ever camera ready. Ivor Heyer the big Boss and Sponsor of our ABI Infaltables was sadly with us just for a day, due to his broken knee, but he was present in spirit if not physically.

Our equipment like my pervious expeditions consisted of AB Inflatable 14’AL, which were specially imported from Colombia. The Outboard Yamaya 40hp two stoke engines are working well and did not give us any troubles. Every morning when we packed our boats, it made me wonder, how the hell all this equipment and seven crew will fit on this boats. But to my pleasure they always did.

We travelled on a average speed of 30 to 38 km per hour, and travelled about 150 km per day, a total of 3350km in 31 days. On the river, we had some hard moments, while some were real pleasure. It was sheer excitement when we first saw a majestic Moose, who stood his ground, and looked at us, with the same curiosity as we did to him. It was spell-bounding moment when we saw the majestic Bold Eagle soring the sky. But my real animal high was when I spotted a Wolf, and later a black bear crossing the river. We silently floated among with the animal. When we sat on the fire and admired the long arctic sunset, after a cold and rainy day, I often wondered, if Paradise could get any closer to this!!

After 5 weeks of driving Boats and sleeping in tents on this big river, it is great to be home again. I will never forget this wild and harsh climate, but the beauty of the wilderness will stay with me for the rest of my life. We met some of the best river folks and I would say again and again thanks to all our supporters and friends.

With best regards Andy Leemann Special thanks to: