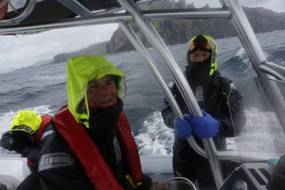 The Expedition started with two RIBs on the 8.01 2016 in Puerto Montt with the big goal to reach Puerto Williams and if all would go smooth even make it to round Cape Horn.

Andy & Dominic at the Cape Horn

The Boats: AB Inflatables 24VST with 2x Yamaha 115Hp and 28VST with 1x Mercury Verado 250Hp were our Babies and naturally the key to our success. We managed to navigate without a serious problem which proofed that the equipment was the very best and the preparation did not lack on anything. Gasoline was a big issue since the longest distance without any supply was 400nm (720km). For this distance we needed 1600liters.

The Crew: was a mixture of international folks from 35 to 70 years old. Having 7 Captains on board was not always easy but we were a great team and the longer we worked together the better we performed. It showed me again that it is the passion for adventure that makes you go with ease through tough conditions and not only the physical strength. I felt very united with my co expedition leader Ivor and for that I’m thankful. 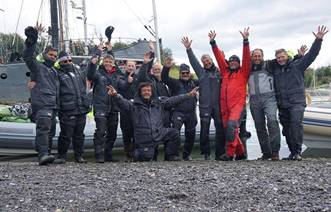 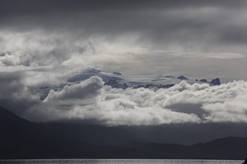 The weather: was our biggest challenge and a big part of success or failure. We’ve been very lucky to find this weather window and I can only send a big thank you, to the god of the sea, Posaidon. The problem we faced, was that whenever there were good conditions to sail, we had to cover as many miles as possible. Since in bad weather you can be parked for days or be trapped in harbor by authorities. Sometimes I felt a bit like rush and score. We had issues like strong winds where we had to stop to find shelter, or faced rain and bitter cold where everybody suffered secretly. But all in all we have been more then lucky. The rounding of Cape Horn our Everest, in 5m waves and strong current showed us that this southern Ocean has teeth and will not give its way so easy.

The Navigation: was difficult since the charts are not always correct and we had to do a lot of eyeball navigation which was great since we had lots of captains in our team. Bernd’s job was to do the backup with the Paper charts and whenever there was an issue he could help us. For us seaman it felt very special to sail in this famous waters, like the Strait of Magellan or the Beagle Channel and Cape Horn. The ultimate high light of our journey came to all of us when we rounded the Cape Horn where the Pacific meets with the Atlantic Ocean.

The permits: my biggest worry. The requirements for the Zarpe (cruising permit) was a very long list of safety material and documentation. The inspectors were very precise and almost turned the boats upside down. Thanks to Yerko the Capitan de Puerto in Pt.Montt we got the Zarpe (cruising permit) all the way down to Puerto Williams. After the go ahead from the Navy, I was 10kg lighter, such a relief. We had to give our position to the Navy every day at 8 am and at 8pm by satellite phone, so they could trace us and in case of emergency would know where to search for us. The officials whom we had to deal with were all very friendly and helpful and there was never a problem with communication. We all felt very secure and supported by the authority.

Patagonia: is just a Paradise to cruise. The Chileans are the greatest people, they helped, supported us and gave us shelter whenever needed. They are all “Gente del Mar”. Sea life is incredible and we’ve been watching Whales, Penguins, Sea lions, etc, etc every day. The countryside is rough and lonely. Sometimes we have not seen boats or people for days. We cruised from glacier to glacier around icebergs and looked at some giant waterfalls. There is no word to describe the scenery. The sun goes down around 10pm so we had plenty time to enjoy our camps. I do not think that one can find a solitary and more beautiful place on The mother earth. 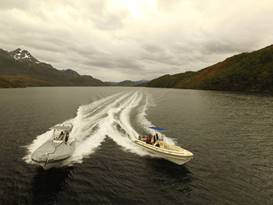 Support and Sponsoring: Thank you to: – AB Inflatables – RIBEX-BRIAN SL with Brigitte – Yacht Center Palma – Lalizas-Hella Marine – Agunsa (Julio and Gonzalo) – Captains of Patagonia – Henry Lloyds – Motonautica Balear – Petra Grossmann – Kuback Studio (Miguel Caballero) and so many others who were in standby mode for whatever problem that could arise. After 4 days of work (transport and unload containers, putting the boats in the water by crane…) Oxxean – Empresas maritimas in Puerto Montt did look at our web page and decided to join the sponsor group.

The Media team: Klaus Kranewitter, Apal Singh, Lina Timm, the fantastic Enrico Pallazzo Produktion! www.epff.de in Munich did an excellent job in a very difficult environment. At day time they did all the filming and photography, at night time they had to cut the clips and whenever there was a chance for mostly very slow Internet they just did not sleep to use every minute to download. Thank you for the incredible results! You guys rock!

Expedition Leader: I reached a goal to round Cape Horn in a Rigid Inflatable Boat and I enjoyed the mystique that goes with the Horn. Loved and hated by seamen for the past 400 years, many died in an attempt to round the Horn. They are believed to return as the albatross that glide with motionless wings above the ocean swell that surrounds us. Like an ascent of Mt Everest, sailing around Cape Horn earns you a place amongst the elite, and with good reason. Often wreathed in fog and smashed by towering seas, the southern-most headland of Cape Horn Island marks where the Atlantic and Pacific Oceans collide. Thanks to all of you and specially the team which made this epic voyage possible.