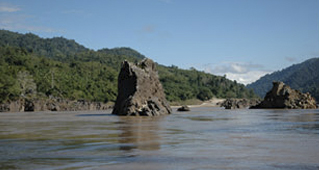 The Mekong is Southeastern Asia`s lifeline and with a length of 4.500 kilometres one of the major rivers of our planet. On its way from the Tibetian highlands down to the South China Sea it passes through six countries, China, Birma, Laos, Thailand, Cambodia and Vietnam. Struck by many wars and politically isolated for decades, the region remained largely unknown until well into the 20th century and the river has never been travelled in its full length.

The first major expedition started in 1866. Ten French officers, geologists and botanists lead by Doudart de Lagrée and Francis Garnier went upriver from Saigon in search of the Mekong`s source. They never found it – it was not until 1994 (!) that it was discovered. Nevertheless Garnier reached China after two years of travelling under the most difficult conditions and with every possible complication one could think of. De Lagrée himself did not make it to China – in the course of the expedtion he died of a tropical disease. With the intention to open up “the backdoor to China” for French trade, the explorers mapped large sections of the Mekong. Details of this historical untertaking are described in Milton Osborne’s book “A River Road to China” published in 1974. As the main finding of the French expedition Osborne notes the fact that navigable river road to China did not exist – distances were far too big and difficulties, e. g. river rapids and shoals, impossible to overcome. The plan failed.

Since the end of cold war the countries of the Mekong region locked up behind the “bamboo curtain” have started to slowly open up to the rest of the world. But as far as commercial shipping is concerned, the Mekong remains of little importance – even in the 21st century. The river road to China the explorer`s dreamt of still does not exist. And while the political changes of the past century were fundamental, the landscapes along the banks of the Mekong still remain largely unchanged.

Recently the countries belonging to the so called GMS (Greater Mekong Subregion) decided to cooperate more closely. In 2001 they firmed a treaty that allows navigation in the middle and the upper stretches of the Mekong. Furthermore the GMS countries are working on the development of joined concepts for tourism. Under very critical observation by the world public are the projected dams, power plants and rapids blastings along the river and its tributaries. A realization of this projects would put the Mekong`s people and their environment in jeopardy. The natural balance of the river would be destroyed – with consequences that cannot be foreseen. Our expedition wants to bring a deeper knowledge and understanding of the whole region, its natural beauty and diversity to a broader public. A steady influx of tourists secures income for the GMS countries and thus helps to achieve a sustainable development – environmental aspects and the protection of nature would be of utmost importance in this context. The rape of nature could be avoided.

One thing is for sure: The whole Mekong region is undergoing significant change. And perhaps our expedition offers one of the last chances to experience the river in all its natural beauty – untamed and pristine.

The Three Sections of the River

The Mekong can be roughly divided into three sections: the upper stretch from the Tibetian headwaters to the Golden Triangle where the borders of Burma (Myanmar), Thailand and Laos meet. Here the river cuts deep into the landscape and is full of rapids. In the middle stretch from the province of Ubon (Thailand) to Champasak (Laos) the Mekong is slowly approaching flat terrain. Its lower reaches begin at the Khone waterfalls – here the river leaves Laos and plunges into Cambodia by way of a stretch of enormous waterfalls. In Southvietnam the Mekong finally spreads into his giant delta and reaches the Chinese Sea.

The expedition will take three weeks and starts in November at the end of the rainy season. On the one hand the climate will be the most pleasant at that time but even more important is the fact that the river will have enough water so that we can navigate the tricky passages and shoals. We start in Simao Harbour in the Chinese province of Yunnan. Simao marks the northernmost point of our trip – further upriver the Mekong is impossible to navigate. And even downriver navigation on the Lancangjiang how the Chinese call the Mekong in this region is extremely difficult. Rapids and shoals demand utmost concentration and a lot of experience.

We leave China at Guan Luei and follow the river South to the point where the borders of Burma (Myanmar), Thailand und Laos meet: “Sob Ruak” – the Golden Triangle. Notorious because more opium is grown nowhere else in the world – it is said that the region delivers three third of the world production. 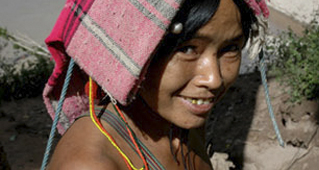 From the Golden Triangle into the Laotian highlands

At Chian Saen (Thailand) the river makes a sharp turn into an easterly direction. For a while we have Thailand to the right and Laos to the left river bank. Then the Mekong leaves the border. Population along the banks is sparse now – here mountain tribes like the Hmong and Yao live their secluded lives in an absolutely breathtaking landscape. On our way further to the East we reach the Laotian Kings´ residence Luang Prabang. The oldest undestroyed temple city of South East Asia was declared a UNESCO world heritage site in 1995. The kings of Luang Prabang ruled for over 1000 years until the last monarch was deprived of power by the communists in 1975. And although the kings left, the faith remained: Luang Prabang is the country´s religious center – buddhist monks in their shining gowns can be seen everywhere in the city. In the early morning hours they are out in the streets for “dag bat” and have to beg for their daily food in a long procession.

Navigating down the border between Laos and Thailand

Before we reach Vientiane, the capital of Laos, the Mekong again becomes the border between Laos and Thailand. We have left the highlands of Laos now and the river becomes considerably wider. Vientiane is spreading along a twelve kilometre river bend. A present of the Australian Government is the Friendship Bridge, one of the very few bridges over the great river. The bridge is connecting people that are separated by a river and a country border but are closely connected through a common language and culture. Nevertheless the differences are clearly visible: Dense wood with only small settlements on the Laotian side and rather prosperous thai villages on the other bank. Contrasts that will diminish soon – not only because of the new bridge connection.

Downriver from Vientiane the Mekong is bending in easterly, then in southeasterly direction and keeps forming the border between Thailand and Laos. We pass Savannakhet, the second biggest town in Laos. Here, the next Thai-Laotian friendship bridge is under construction and due to be opened in 2006. Savannakhet is well worth a visit – the old villas and houses in the government district mirror the charm of colonial French Indochina. South of Savannakhet, in Khemmarat, the rapids of Pak Saeng and Song Khon are waiting for us. A pilot is indispensable to master this very difficult section of the river.

Before we leave Laos for good we will visit the country´s most famous Khmer temples in Wat Phu located near Champasak. They are hidden in the wilderness about 12 kilometres off the river. And it is just the remoteness of the location that makes for the special appeal of this impressing multilevel forest temples. They also have been declared a UNESCO world heritage site.

There are about 200 kilometres left to the Cambodian border and we are approaching a unique region of wetlands known as “Si Phan Don” (4000 islands). Here the river is up to 14 kilometres wide. Besides the main island Don Khong with a size of about 150 square kilometres, the whole archipel consist of small canals dotted with tiny little islands – a mysterious waterworld that can fantastically be explored by rib. Everywhere we meet fishermen with there small boats.

The waterfalls of Khon Phapheng lie ahead of us – a series of cascades and rapids that continue for about 10 kilometres. Facing those millions of litres of water roaring down into the abyss in every single second, the French explorers should have realized that the waterway from Vietnam to China would remain a dream. Even for us in our expedition ribs there is only one chance: The ribs are hauled out and transported on land to be launched again on the other side of the waterfalls.

The river is now pouring down into the plains of Cambodia. Very slowly it looses its untamed wildness and allows for regular river navigation. Rice paddies appear along the river banks and become more and more frequent. During the dry season this region receives water from the Tonle Sap lake via a river of the same name. Tonle Sap is an enormous natural fresh water reservoir of about 150 kilometres expanse. There is no other lake in the world being that rich in fish.

An incredible natural phenomenon is the change of the current that is celebrated with traditional ceremonies in the whole region. During the rainy season the Mekong is that strong that it changes the direction of its tributary, Tonle Sap river. The Mekong presses its waters into the Tonle Sap lake that functions as a natural backwater and it is not until dry season that the Tonle Sap river changes direction again.

Rural Cambodia has a very peaceful and secluded atmosphere while Phnom Penh is considererd the most beautiful of the indochinese capitals that kept a lot of its ancient charme. It is hard to believe that a generation past this tortured country was suffering under the terrorist regime of Pol Pot and his Khmer Rouge. From Phnom Penh we make a side trip on Tonle Sap River to see the natural reserve of Tonle Sap Lake and to visit the heart of the ancient Khmer reign: the temples of Angkor Wat and Ankgor Thom.

The last part of the journey leads from Cambodia to “Song Cuu Long” (9 dragons) as the Mekong is called in South Vietnam. Here it diverts into the nine major arms of its delta and further into a vast net of little rivers and canals. Figures alone are impressive: About 5.000 kilometres of rivers and waterways crisscross the delta area that has a total extension of about 200.000 square kilometres. During the Vietnam War this area was controlled by the Viet Cong and a scene of heavy fighting. But the delta also is one of the biggest rice growing areas in Asia. Rice paddies mingle with tropical plantations and floating villages. Once again you can feel how closely people’s lives are related to the river.

The expedition ends in Ho Chi Minh City, formerly known as Saigon. The metropolis of 6 million inhabitants is the biggest city in Vietnam and a more than overwhelming contrast to the rural Vietnam of rice paddies and fishermen that we just left. Stylish skyscrapers alter with run down concrete buildings, venerable pagodes and temples or the architectural heritage of the French colonists. The boom can be noticed everywhere and expresses itself with construction sites, commercialization and traffic chaos.

This is one of the most growth-orientated corners of the world. And undoubtedly the Mekong subregion is undergoing significant change. The more valuable the adventures and impressions of the Mekong expedition will appear to you. Very soon this trip might be impossible to repeat.