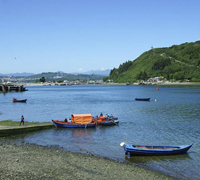 By now the whole crew has arrived in Puerto Montt, Chile. A beautiful starting point for our End Of The World Expedition! Only one day left till we start – but we had a few minutes to catch some impressions for you. Last day of preparations, lots to do! Andy fixes a gasoline tank while Ivor fills up gallons and gallons of fuel. 1300 liter should be enough – for the first stage. 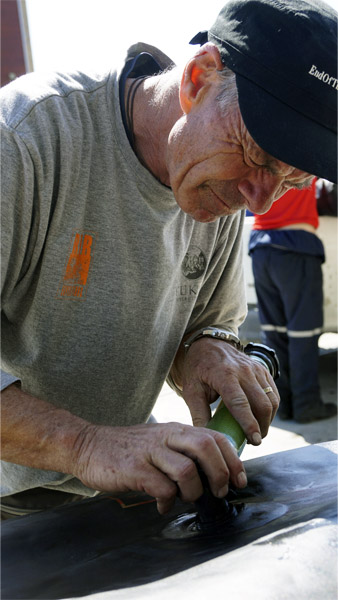 A beautiful starting point for our
End Of The World Expedition

End of the word expedition was born over a cup of coffee, when Ivor and me meet in Amsterdam during a boat show. Ivor came up with the idea of an expedition in Patagonia and I jumped to it immediately. Till now all my expedition has been on rivers…but this one was too tempting to be missed.

Ivor Heyer, the manufacturer of AB inflatables has been my old expedition hand and sponsor of our boats for various expeditions. Ivor is passionate about the outdoors and loves to explore the nature. One of the reasons for him to sponsor our expeditions is his boats get tested in the extreme conditions. Something, which no lab conditions can ever do.

Expeditions start way before boats are actually put on the water. It takes a year of planning, getting permissions, logistics, and other preparations. End of the world expedition was particular hard one to prepare. I had put in more then 800 hours of work to it. Ivor Heyer and me visited Puerto Montto two month ahead of the expedition to meet the authorities and look into every detail. That visit was great help; not just to organize, but also to understand what we were getting in.

Hardest part was to get the permissions. We were dealing with the navy, which was not very keen in allowing us to go ahead. Since safety, security and shipping is their domain. It was only when they show how serious we were and meant business that slowly they started taking it seriously.

Most expensive part was to transport the boats. Ivor send his AB-24 feet from Columbia and I send AB-28 feet RIB from Spain. Boats had to unloaded and loaded again three times before it reached it’s destination, Puerto Montt.

After that they had to ship to the Oxxean Marina, one of our supporters. It was here they had to unload with heavy equipment and cranes. To put the boats down in water was not easy task with six-meter high tides.

We had to mount the boats and get them ready for the inspection by the coast guards next morning. Two very serious inspectors came to look at the boats, and the safety and security equipment. And also to see if the boats would hold up for 3500Kms in one of the most dangerous waters. They went into every minor detail. And then gave a go ahead.

After inspection Ivor and me went to meet the Capitania de Puerto, Mr. Yerko. He looked at the report, while we sat there with our stomach churning. After a while he looked up and gave a “thumps Up”. It was all-ok. I felt as if a big stone just dropped from my shoulders. Ivor and I could not stop smiling, we knew now we would get our Zarpe, the cursing permit.

Slowly crew started to reach. And the preparation started in full swing. Food and other camping gear had to be organized. And most importantly fuel. We started with 1200 liters of petrol.  We did not know how the Ribs would perform in heavy water with so much load and how much fuel would they consume. We would know as we go along.