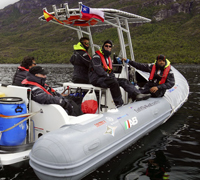 It is no fun to put down camps when it rains! And that is how the day started for us. It poured quite a bit; but we had to do, what we had to do…. Personal stuff, still wet, tents wet, everything had to be packed and loaded in the boats. It did not take a while before sky opened up and sun warmed us. Being so near the poles, sun is very strong. But in the conditions we sail, it is always welcome it’s warm embrace. 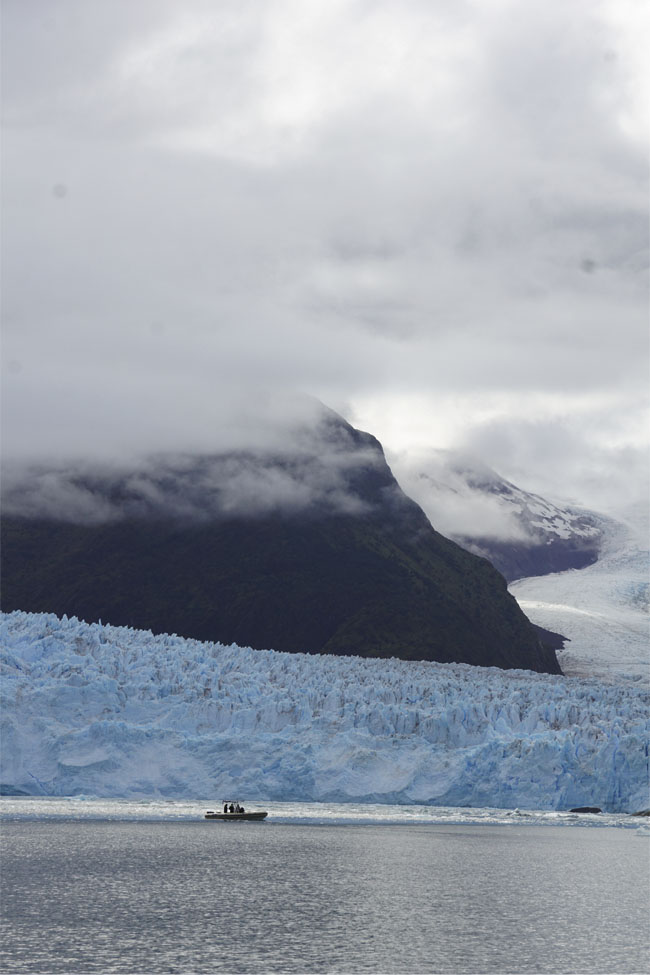 We started our journey to Puerto Nantales. Our big stop over. But, not before a slight de-tour to the Glaciers. The grand view of big block of ice shinning in the bright sun. It seem like a big waterfall had just frozen.
This was third glacier we had visited and like each one it had some something new to offer. This time it was Dolphins. And as we approached the Glacier,  carefully through floating ice, a Dolphin came by, after a brief swim around, it disappeared and then came back with seven more. As if the Dolphin had gone to called her friends and family to meet us. They swam along with boats, going back and forth. Never too far from us. Klaus and Apal immediately got into action, taking pictures and shooting videos with drones. Klaus our excellent drone operator got some amazing footage. And the moment we finished shooting, all of them disappeared just as suddenly they came. It was simply breath taking and a memory that would always stay with us.
Then we headed to Puerto Natalis. And we had a long distance to cover… It was a long day on boat…but everyone looked forward to reaching Puerto Natalis.  Each had different reasons. This was not only a major stop, but also fuel stopover, something which has not been not easy to find. Apal and Klaus wanted Internet so they could upload pictures and videos. While some simply looked forward to good hotel and a shower.
As we entered the “Senoret Channel” it was great feeling to see the city. Very different landscape from what we had seen till now. Big open flat grassland, and city in designed in perfect blocks. We knew it was something to look forward to. It was a long day, and we had covered 174 km, a new record of the expedition.   On reaching the port, Jurg immediately got into action and found a beautiful hotel.
Klaus and Apal got down to business of sorting, editing and uploading material for Facebook. While Carlos looked for a place to eat. It seems everyone had a business to take care of. As for me, I was excited to meet my family, which was, to join me next day.
On reaching Puerto Natales we have covered almost half the distance. And further we go we reach closer to our final destination Cape Horn.

Well, according to statistics, it’s raining every second day here this time of the year… We were lucky so far.