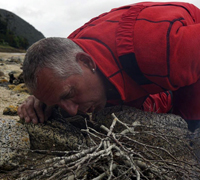 This wasn’t as funny as it looks, we lost valuable time. The earlier we leave the less windy it is and we travel easier. That’s why we always start at first light in the morning.

Suffering in the Gulf of Penas and camping in the wild
Today our journey started early. We wanted to cover as much distance as possible, and by afternoon the thermal wind starts, with strong wind and high waves. The higher the waves the harder they are to ride and that’s equally hard for the fuel. As one of our main concerns in this expedition is to find petrol, we have to be extra careful with it and make every liter of fuel count. Today, we wanted to cross the Gulf of Penas, which can be translated with “suffering”. It was first time we drove in open sea. And the Pacific Ocean did not disappoint us one bit. True to its character, very soon we had strong winds and high waves.
Waves as high as four to five meters hit us hard. Our skippers, Andy and Ivor did an excellent job of driving the boats as smoothly as possible. First half of the drive the winds were against us and second half had winds behind us… which gave a push to the boat, but waves still came strong. In all this we did 140 miles, which was the longest distance we covered in a day so far.
At the end a beautiful campsite was found. First time we put up tents. Nice fire to warm body and spirits. We had doup and cheese for dinner which was washed down with the nice Chilean wine.
Andy did the sum up of the day and told us what was ahead. And it seems what we faced today was just the beginning.
We are going to get much more of the same ahead… Strong winds and high waves means more suffering. But that is why we here. No, not to suffer. We’re here to enjoy the nature in it’s totality and this is just small price to pay for it.

Wait… what?! Where are we? We just left for the difficult part of the journey – and lost our way promptly.