Description of the Expedition

A little over a third of the forest area we will be exploring in the Amazon, the world’s largest rain forest, has been ravaged by slash-and-burn deforestation and other forms of destruction. 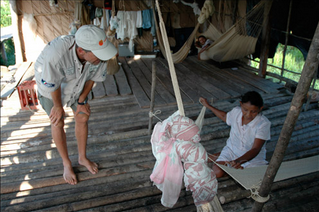 This has taken place mainly because the area is immensely rich in natural resources, of which rubber, wood, gold and diamonds are only a few. Unsurprisingly, this has created a violently resource-hungry mentality which now threatens the Amazon’s survival which has affected the biodiversity of plants and animals, and the indigenous tribes that have long populated these areas (the Portuguese colonized Brazil in the 16th century, there were an estimated 6 million indigenous Brazilians. At the time of the 2000 census, this had already dwindled to 734,000.) Furthermore, the release of carbon into the atmosphere when trees are cut down has contributed to global warming, according to climate-change scientists. A crucial part of our expedition, therefore, will entail documenting the consequences of these environmental shifts and their effects on local population.

On our expedition in 2003, we had followed a route that was discovered by the early 19th century explorer and naturalist Alexander von Humboldt One of his most famous and important discoveries is the Rio Casiquiare, which connects the two largest rivers in South America, the Amazon and the Orinoco.

In 2016 we did the “End of the World Expedition”, navigating 4.000 km along Patagonia on the Pacific Ocean rounding Cape Horn.

We aim to expand these discoveries by revealing other connections between the rivers of the country, which we plan to achieve by travelling 6.500 km from Buenos Aires to Manaus. To my knowledge, this specific journey has never been undertaken on boats before.

We will start in Buenos Aires on the Rio de la Plata and navigate the Parana river until it merges with the Parguay river which we follow all the way up to the Mato Grosso area home to the Pantanal, the world’s largest wetland, and is the habitat for almost a thousand species of animals, including several types of aquatic birds.

The local culture here is fascinating and diverse due to its encounters with various cultures, such as Native Americans, the original settlers, the Africans enslaved originally by the Portuguese, and Europeans.

Caseres, Mato Grosso, Brazil, will be a halfway point, by which time we will have completed the first 3400 km of the expedition. After transporting our boats 280 km by road to Vila Bela da Santissima on the Guapore river a few miles from streams flowing southward to the Paraguay and Paraná rivers. We will follow for 1400km the Guapore river then navigate the Mamoré, a large river in Bolivia and Brazil cruising the Rio Madeira, one of the largest tributaries of the Amazon, and home to the Amazon River Dolphins to finally reach our destination the mighty Amazon river and Manaus.

Thanks for following us: Andy