The company Rib Expedition & Adventure, founded in the beginning of 2004, is based in Palma de Majorca. CEO is Andy Leemann who successfully runs various ship chandleries on the island and now brings his expertise to this new organization. Andy Leemann, born in 1954, is an archetype of a traveller and sportsman. Typical for a fellow from Switzerland, he started off with extended ski- and climbing tours. But soon he discovered watersports and learned how to handle boats even under challenging conditions.

In his early 20s, he bought himself an old Volkswagen van and travelled from Switzerland all the way down to South Africa where he worked and lived for one year. Another year he spent travelling in South America (Patagonia, the Andes, Amazon and Napo Rivers, just to name a few of the places visited). Extended travels in Southeast Asia, Polynesia/Pacific and trips through Northern America (West to East and from the Mississippi upwards to the Canadian border) followed.

Apart from land travelling he has many years of experience as a professional cruising and racing skipper on traditional as well as modern sailing vessels and accomplished more than 100.000 nautical miles. In 1996 friends introduced him to his first Rib-Tour using a six metre inflatable. They travelled along the pacific coast from Costa Rica to Panama poking into all the little rivers and creeks along the way. “That trip got me infected”, he says today. “Even for somebody like me who had been exploring the world for years on land and on water, this trip was a revelation.

Suddenly a whole new world of possibilities opened up. From then on I have been concentrating on rivers and their systems, on the idea of taking one or two ribs and explore places well off the beaten track, on the possibility to enter into nearly unknown or almost forgotten territories.”

Andy is a traveller, sailor, boat racer and explorer. After spending many years on sea, Andy decided to settle in Majorca, where he has a business of boating equipments.
While a boat race in South America, he got exposed to rivers and people living on rivers. Ever since, he has organized and lead river expeditions on major rivers across the world. 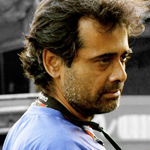 Apal’s first boating experience was while shooting Zambezi expedition for a BBC film. It was enough for him to get hooked, and he has been a regular ever since. He has been looking after logistics of all the expeditions in India.
When he is not exploring rivers with Andy, Apal is a freelance cameraperson, based in Nainital.
He has shot over 50 documentaries and several feature films.